Unlike most pharmaceuticals, cannabis is not a single-molecule drug. It contains a vast collection of active pharmacological constituents, which interact inside the body to enhance, inhibit, and modify each other’s effects. How the marijuana industry measures potency or dosage of a product has repeatedly been a thing of contention, and it’s clear that the way in which cannabinoids are expressed on package labels is a point of confusion for many consumers.  As scientists who spend our time measuring hundreds of cannabis samples, we often find ourselves scratching our heads about what exactly people mean when they say “potency”.

One thing is for sure: cannabis contains cannabinoids (and terpenoids) and those things affect your body. The cannabis market is naturally interested in understanding how those cannabinoids are distributed among the population of cannabis plants, and how to measure the effects of each varietal so as to advertise a potency for each strain.

Take a look at the distribution of cannabinoid values for all flower samples tested by Confidence Analytics to date (2016-01-04). Below is that distribution in a scatterplot which depicts THC, THCA, Available THC (also known as “Total Active THC” or “THCmax”), Available CBD, and Cannabinoid Total (see here for definitions) for all flower samples tested. Beneath the scatterplot, we’ve included an excerpt from one of our Certificates of Analysis and we point to where on the scatterplot the values from that one certificate reside. 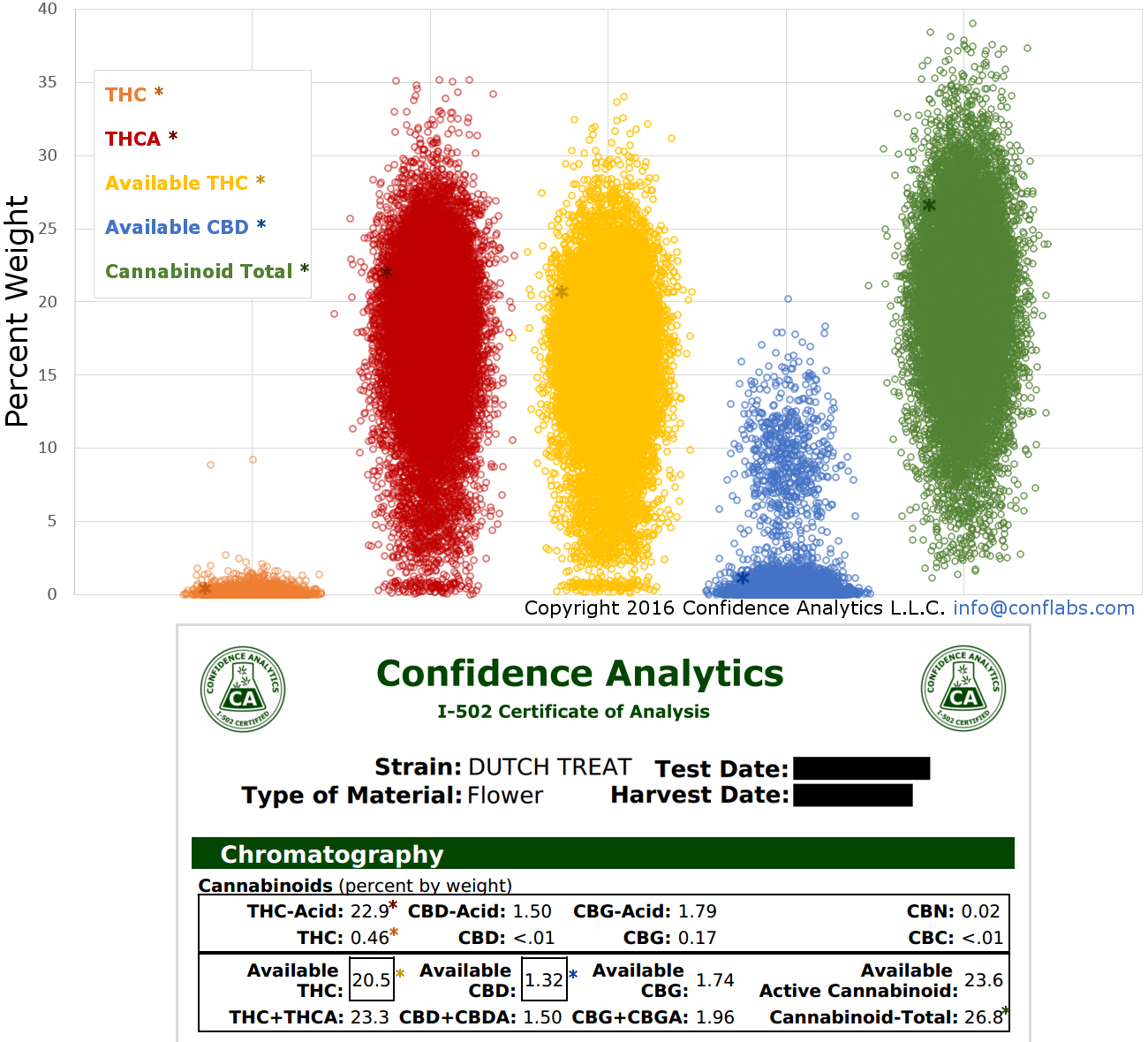 In case you’re wondering, the two numbers on the certificate that have boxes around them are the only two cannabinoid values required to be on the package label at retail. You are not prohibited from putting other numbers from the cert on your label, so long as you label them accurately, but the two numbers in boxes are required. We encourage our customers to also include Cannabinoid-Total on their label and highlight it as the summary measure of cannabinoid content.

That said, we’ll also offer up our strong opinion that none of the numbers on the Certificate of Analysis are yet well correlated with “potency”. Potency is a subjective judgement, which is dependent on the biochemistry of the user and is controlled by complex interactions between the human and dozens of different molecules, including both phyto- and endo-cannabinoids while probably also modified by terpenoids. Labs like ours can measure cannabinoid/terpenoid content of a sample material, but potency is something you feel in your mind and body. The two things are different. The complicated dose-response relationship of cannabis is not yet well characterized and that presents a major obstacle to patients, care providers, and recreational users alike. More on that in a future post.