Help! How did my cannabis become exposed to pesticides? I’ve never used that before…

Cannabis can be exposed to pesticides through a wide variety of sources. Detection at low levels -even levels above the action limits- is not necessarily evidence of wrongdoing. When considering how preventable human actions can be the cause of the exposure, we can reasonably group exposures into one of three groups:

Why did I fail Pesticides?

Samples fail for pesticides when any of the compounds listed in WAC 314-55-108 (Washington) or in CCR Title 4 Division 19 Article 5 section 15719 (California) were detected above the action level listed. This doesn’t mean that you sprayed the pesticides, or that you are at fault for having cannabis exposed to pesticides. If your company isn’t sure how the failing pesticide result came about, see question below “What can I do about it?” for more information.

What did I fail for? How did my cannabis become exposed to pesticides? 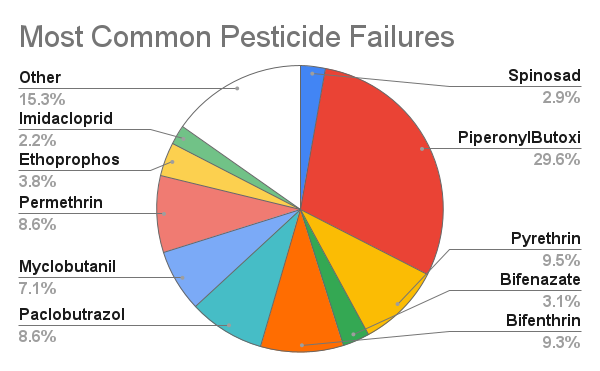 Here are some of the most prevalent pest residue issues and where they often come from.

What can I do about it?