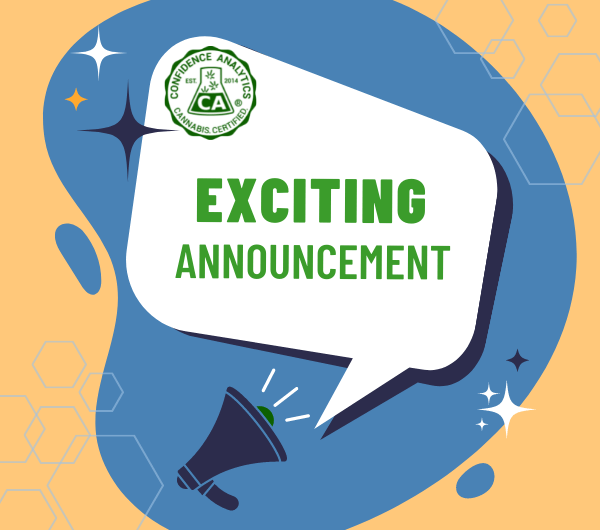 We are happy to announce the addition of CBNA, CBCA, and CBL to our service.* Through our commitment to constant innovation, the science team at Confidence Analytics has recently added these 3 new cannabinoids to our “potency” method and our cannabinoid list now includes  17 cannabinoids!!

CBNA and CBCA are the acidic precursors of CBN and CBC, respectively, two cannabinoids we’ve been measuring for over 8 years. CBL is a new kid on the block.

As an analytical lab, we can only report accurate quantifications of cannabinoids when there are commercially available chemical standards. So while we have been detecting these three cannabinoids for a long time, we have not been able to report them to you until recently, when their standards became available from chemical manufacturers.

And while it took hard work to add these new analytes to our cannabinoid list, we are offering it to you for the same low price as before.

Long lauded as a super-sedative, a human study using CBN has not substantiated this relationship1. Rodent and lab studies have found it to be antimicrobial2, neuroprotective3, and an appetite stimulant4. Our lab regularly finds CBN and CBNA in products, including in freshly cured flower. Which is interesting because while the dogma sometimes suggests that CBN is only formed as a degradation of THC, the presence of CBNA (the acid precursor to CBN) present in fresh flower indicates it is synthesized by the plant, as well.

You’ve heard of the entourage effect, well get ready for CBC’s precursor CBCA. While not intoxicating on its own, it is believed to enhance and modify the effects of other cannabinoids5. It may also battle inflammation6, cancer7, and acne8. We are glad to have CBCA on our cannabinoid list.

Not much is known about CBL. It does not occur in high abundance in cannabis flower. CBL is a degradant of CBC – created when CBC is exposed to light or acid – so it is no surprise we see it mostly in distillates, which tend to contain more degradation products.

Now Testing More Cannabinoids in Cannabis, including THCV, at the Same Price

*Due to DCC limitations, testing for these new cannabinoids is not available in California.